The second KID_ACTIONS EU Policy, Research and Practitioners Forum was a success!

Last month, the second KID_ACTIONS EU Policy, Research and Practitioners Forum took place, marking the final event of the KID_ACTIONS Project. More than 70 people attended the event onsite in Brussels and online. The participants represented a wide area of sectors, such as research and academia, NGOs, Education and Training and Industry and SMEs. The day focused on discussions and exchanges between the experts, educators, academics and professionals. Their input is used to finalise the policy recommendations, the final output of the project.

The day started with a presentation by Deborah Vassallo, Service Area Leader of the Safer Internet Center BeSmartOnline Malta. She highlighted the importance of this KID_ACTIONS Forum focused on cyberbullying, as 30% of the calls that their helpline received are related to cyberbullying issues. When Deborah was asked what needs to happen to tackle the issue of cyberbullying she replied:

“We need to start from a very young age to talk about it. Sometimes we are scared that children are not prepared yet. We need to include it in the curriculum, not only the topic of cyberbullying but also talk about respect.” 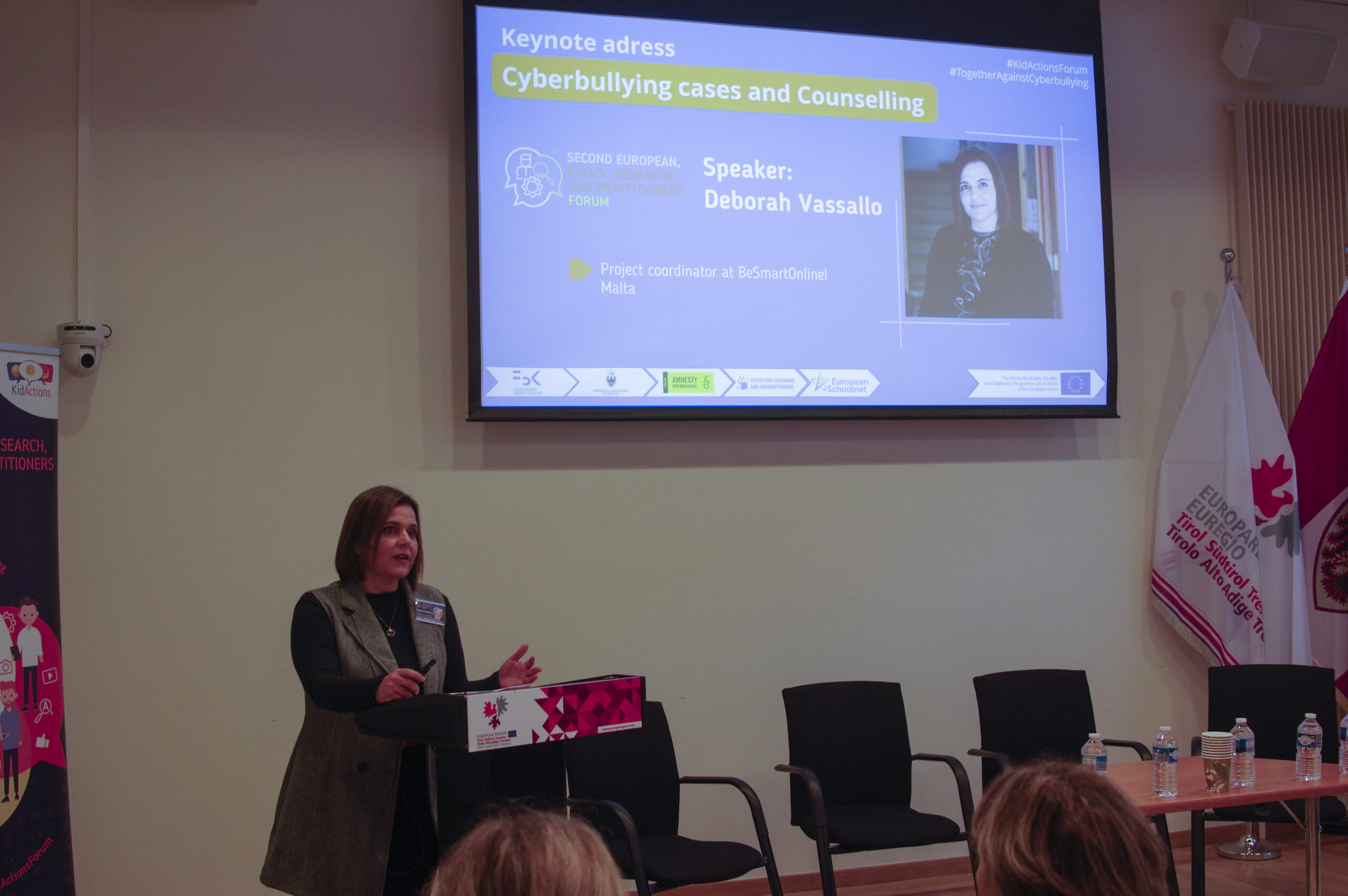 After a coffee break, Sara Tonelli introduced the digital tools that have been developed as part of the KID_ACTIONS Project. She gave a short overview of CREENDER, High School Superhero and Rocket.Chat. Gareth Cort followed her example by presenting the Educational toolkit, including the activities that use the digital tools.

Following this introduction, the panel discussion kicked off with Nika Brdar a Youth representative Slovenia/ MC BIT Črnomelj, Valbona Makovci a youth worker and trainer, Enrico Maria Piras a researcher from Fondazione Bruno Kessler (FBK), Igor Jojkic a trainer at Youth for Exchange and Understanding (YEU) Serbia, Clara Spagnoletta a teacher from Italy and Luca a student from Italy. The panelist discussed their experience with the digital tools and Education Toolkit.

A valuable suggestion for the future was mentioned by Enrico:

“Having stewards that can showcase how to use the tools and activities would be useful. Having someone show how they navigate it [the Education Toolkit] and why they navigate it, discuss the choices that they made and show the flexibility.”

Feedback from Luca, a student who tested with his class various activities and tools had positive feedback:

“I think the most important thing we learned is how to identify with other people. How to empathize with them. Which I think is very difficult in general, but it even becomes more difficult when it comes to cyberbullying.” 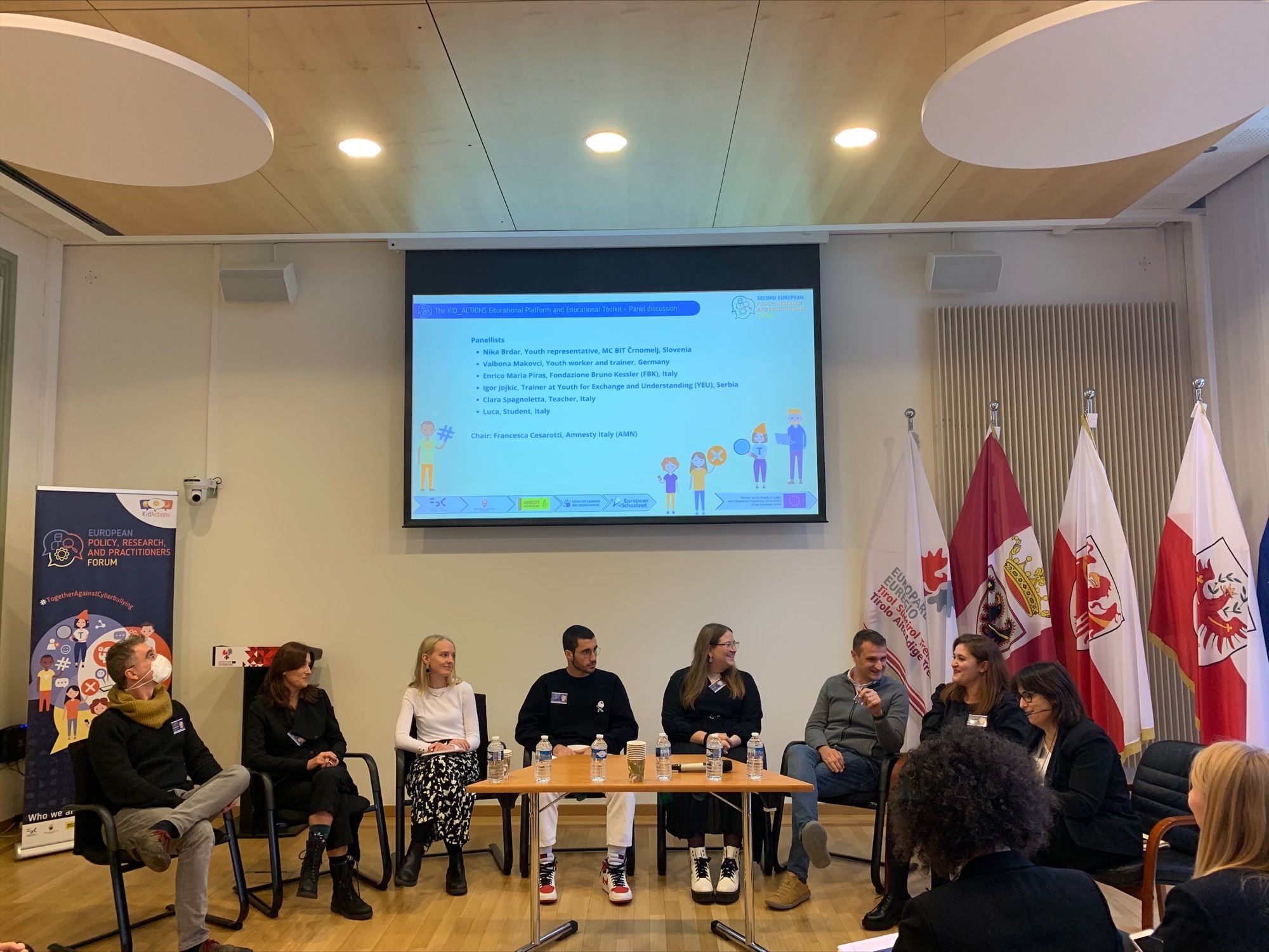 After the lunch break a sneak peak of the Policy Recommendations was presented by Verónica Donoso an external consultant of EUN. The policy recommendations are directed at different stakeholders that can play a part in preventing, detecting, and combatting cyberbullying, such as, the civil society, the ICT sector, families and caregivers and children and young people. Verónica explained the importance of good policy recommendations by highlighting the possible serious consequences of cyberbullying: embarrassment, fear, self-harm, emotional trauma, social isolation and so on. At the same time, she warned to be cautious of media panics or moral panics as a Safer Internet Representative mentioned during interviews in the first year of the KID_ACTIONS Project:

After the introduction of the Policy Recommendations the panel discussion kicked off with João Pedro Martins a BIK Youth Ambassador Portugal/KA Lab member, Celina Sørensen Digital Child Safety Manager at LEGO Group, Bill Howe from StopHate UK/ KID_ACTIONS Lab member, Charalambos Papacharalambous, EVS YEU Cyprus and David Ressegotti from High school Lorenzo Guetti of Tione. They discussed the main challenges with combatting cyberbullying in schools, the challenges that the future might bring and their views on the KID_ACTIONS policy recommendations.

Joao a BIK Youth Ambassador identified a major challenge: “The continued challenge is to catch up with new technologies, the influence of Artificial Intelligence and the way that Virtual Reality and Augmented Reality can change the way we interact. I think that the platforms itself – we saw from time to time we are playing generation catch-up – who is using Facebook and Instagram and now TikTok, we will continue to be doing this in the future. […] The new ways of interaction with for example VR presents the other challenges, […]how will reporting and safeguarding young people work?” 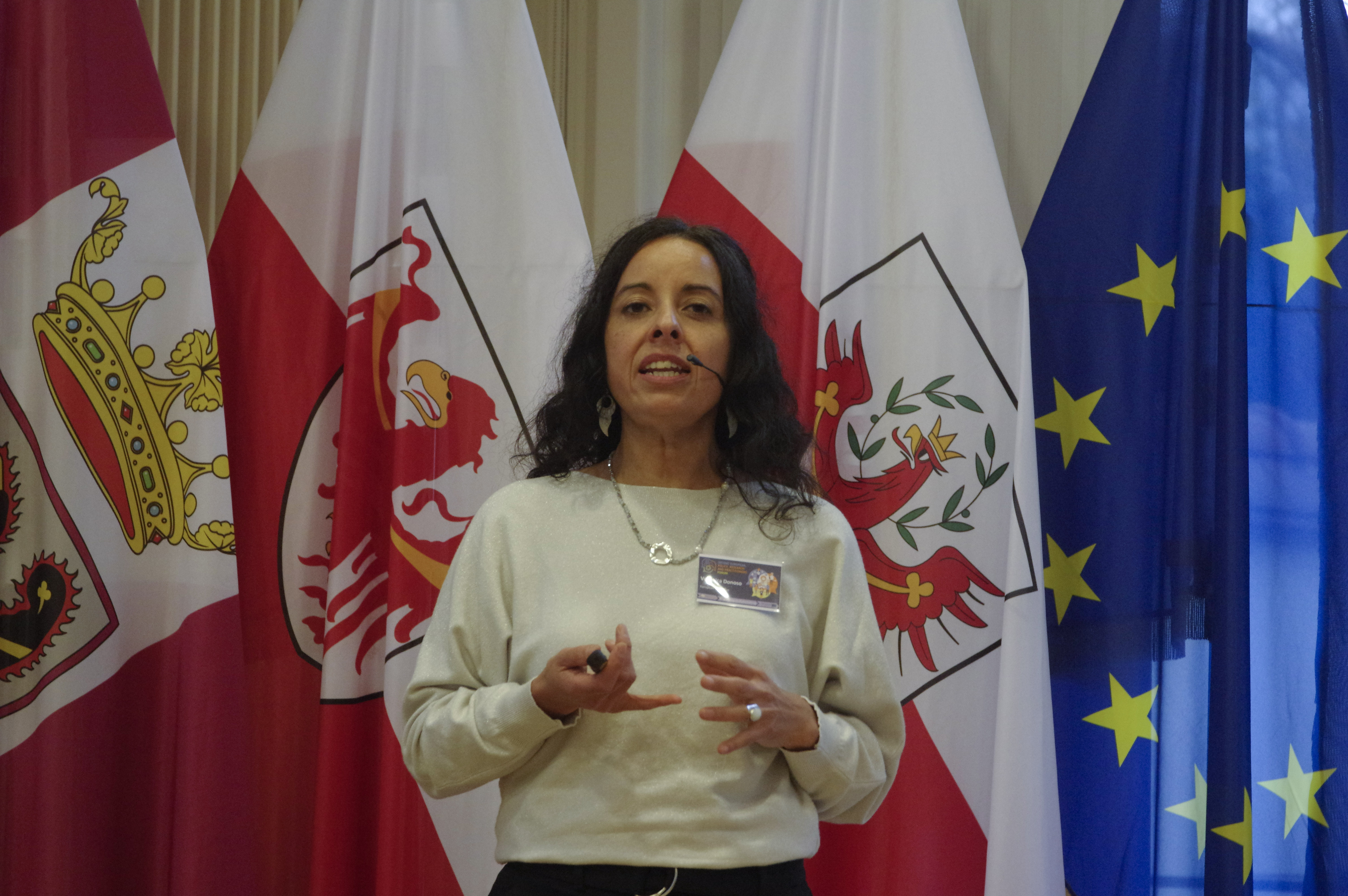 For the final part of the second KID_ACTIONS Forum, the last group of panelists were invited by Alessia Torre from FBK to the stage to discuss the lessons learnt during the KID_ACTIONS project. The panelists were Sara Tonelli from Fondazione Bruno Kessler (FBK), Cinzia Largher from Autonomous Province of Trento (PAT), Rita Marques from Youth for Exchange and Understanding (YEU), Francesca Cesarotti from Amnesty Italy (AMN) and Sabrina Vorbau from European Schoolnet (EUN). The panel discussed the different roles of the institutions in the KID_ACTIONS project, the challenges the panelist encountered in their tasks during the project, how they see the future of the tools and activities developed in the project and the future plan of the institutions to keep on working on cyberbullying.

Alessia Torre from FBK emphasized the importance of dissemination. She mentioned that now at the end of the project it is key to keep promoting the tools developed, they are openly accessible for everyone, and she invites everyone to use them and disseminate them to ensure the sustainability of the project:

“This is not the end of the story, because as you saw today, a lot has been done. But we are still far away from the goal to fight and reduce cyberbullying. The good news is that all the institutions part of the KID_ACTIONS Project and the people who joined the Forum in the room and online and those we met throughout the project these two years, are all committed to this purpose.”